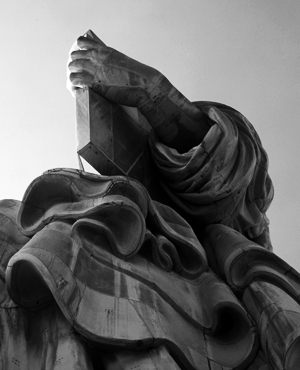 Violation of probation: Darryl Strawberry. And that’s just Darryl Strawberry. The historic parade of Yankee players, owners, fans (and some fanatics), provide serious lessons on law and the legal system in this wonderful book. Courting the Yankees invites comparison to another anthology of baseball writing, Baseball: A Literary Anthology, edited by Nicholas Dawidoff (The Library of America, 2002).

In Courting the Yankees, Ettie Ward the editor, has assembled an all star team of law professors united in their love of the New York Yankees. The authors take the reader on a cultural history as well as a solid review of legal concepts illustrated by numerous cases and legal anecdotes. Where a legal result seems odd or unusual, some of the authors examine similar facts and theories befalling other baseball clubs. The result is a solid book on law made accessible to attorneys and lay people alike. Who would have thought that baseball would make learning law easy?

The editor divides the book into five major topic areas with 21 chapters. The topic areas include, Famous Yankees, Notable Incidents, Scandalous Behavior, Yankee Stadium, and Bigger Issues. Each author teaches law; many of their biographies are prefaced by “A lifelong Yankees fan….” Several biographies show other team allegiances.

The first four chapters in the book focus on notable individual Yankees. These four chapters immediately put to rest the notion that this is a typical baseball book, or a typical law book. The reader might normally think that this book would cover only classic baseball disputes—infield fly rule, tie goes to the runner, height of the pitcher’s mound, corked bats, spit balls. Instead, James R. Devine’s first chapter plunges the reader into the intricacies of attorney-client representation, competent counsel and fiduciary duties, all illustrated by Joe DiMaggio’s legal issues throughout his career and private life: contract disputes, 1938 and 1942 salary holdouts, family court (remember his marriages including the 274 days to Marilyn Monroe), sibling issues, and finally the last years of the Yankee Clipper’s life and representation by Morris Engleberg.

Chapter 2, “The Law and Yogi” by Joel K. Goldstein won’t be revealed in this review. Read the chapter otherwise it’s “Déjà vu all over again.” ’Nuff said.

Chapter 3, “Mickey Mantle” by Timothy S. Hall, covers not baseball lore, such as the second game of the 1951 World Series—the game where Mantle playing right field, DiMaggio playing center, and Willie Mays at bat for the Giants popping up to short right, Mantle charges towards DiMaggio for the out, only to catch his right shoe on the rubber cover of a sprinkler head causing a career changing injury—but, instead, it discusses Mantle’s controversial liver transplant after years of alcoholism. The questions posed—should alcoholics receive liver transplants and what role does celebrity play in receiving a donor organ ahead of other worthy, ordinary recipients (similar to the Larry Hagman case)—take an unexpected turn into organ donation programs and donation rates. This one chapter may yet prove that everything in life seeks connection.

Chapter 4, “George Steinbrenner” by Robert N. Strassfeld recounts the tale of the young Steinbrenner’s employment in the family shipping business and his role in the famous torts case Petitions of the Kinsman Transit Co. Clearly, the story is a parable for Steinbrenner’s ownership of the Yankees, and best summed up by the author: “Kinsman prefigures a pattern familiar to Yankee fans: when Steinbrenner shows up, mayhem occurs and people lose their jobs.”

Chapter 9, “The Pine Tar Incident” by Paul E. McGreal recounts George Brett’s famous bat long on pine tar, his home run and the capture of that bat by Royals’ pitcher Gaylord Perry during the ensuing discussion and scuffle. The chapter doesn’t end there. McGreal subjects the Rules of Major League Baseball to rigorous statutory analysis invoking statute of limitations, spirits, canons, even plain text. And the chapter doesn’t end there either. The chapter concludes with Yankee management preparing to complete the game some months later and ticket holder lawsuits seeking admission for attendees at the original contest. And even there it did not end. When the game reconvened, manager Billy Martin has pitcher George Frazier throw the ball to each base in the event Brett and first base runner U.L. Washington failed to touch all bases several weeks earlier. The umpires signaled “safe” at each base but Martin appealed. Lee MacPhail, American League President, had prepared for such an eventuality. A letter was produced with the signatures of the umpire staff from the original game indicating that both runners touched all bases legally. End of a classic baseball story.

The tragedies of life figure in Scandalous Behavior. Already counted, Darryl Strawberry’s numerous criminal incidents pale only when compared with the sheer number of criminal and tortious acts by players and, to be fair, numerous hangers on.

Chapter 10, “Crimes and Misdemeanors” by Phyllis Coleman, reads like a criminal law hornbook with crimes ranging from murder to computer hacking.

Other chapters in Scandalous Behavior cover betting (by Ronald J. Rychlak), language (“Where have you gone, Joe DiMaggio?…Joltin’ Joe has left and gone away.”) (by Mark S. Kende), and commissioner issues (by Charles A. Palmer).

Yankee Stadium provides the backdrop to four chapters and covers early history of the Yankees as the original Baltimore Orioles and then as the New York Highlanders (by Maura Flood), Yankee Stadium itself (by Gregory M. Stein), relocation issues (by Rebecca M. Bratspies), and labor and antitrust issues (by Ed Edmonds).

“Up from Baltimore” by Maura Flood provides what so many baseball historians and fans crave—compelling stories about those magic years at the turn of the century when baseball’s business structure emerged from small National League clubs and the formation of the American League. Its major protagonists involve the politicians of Tammany Hall and the founder and president of the American League, Ban Johnson. The chapter leads naturally into “The House That Ruth Built” by Gregory M. Stein which celebrates in print and subtitle, New York City; all section titles derive from John Kander and Fred Ebb’s eponymous New York, New York.

The book’s final section, Bigger Issues covers desegregation, taxation, and international issues. In “Breaking the Color Barrier” by Timothy Davis the preceding section’s glorious stories contrast with racism and desegregation. Desegregation occurred late in the Yankees—1955 with Elston Howard—nine years after Branch Rickey signed Jackie Robinson. Yankee justifications for failure to integrate were numerous, personal and institutional—they were often backhanded. The Yankees signed a few black players to minor league teams but failed to bring up any to the show. Yankee management argued that none were worthy of high Yankee standards. This policy led the Yankees to directly overlook such early ’50s players as Willie Mays, Larry Doby, Roy Campanella, Don Newcombe and Ernie Banks.

Baseball may best be watched with an ice cold beer and peanuts. But I have a suggestion for reading this book: Prepare a bowl of strawberries, sprinkle some powdered sugar on top, pull up an easy chair and dream and read a little of lazy summer afternoons, the business of baseball, the Yankees, and all the turmoil and tragedy that lies just beneath the surface of Elysian Fields.

This article first appeared in 22 Entertainment & Sports Lawyer No. 1, Spring 2004.